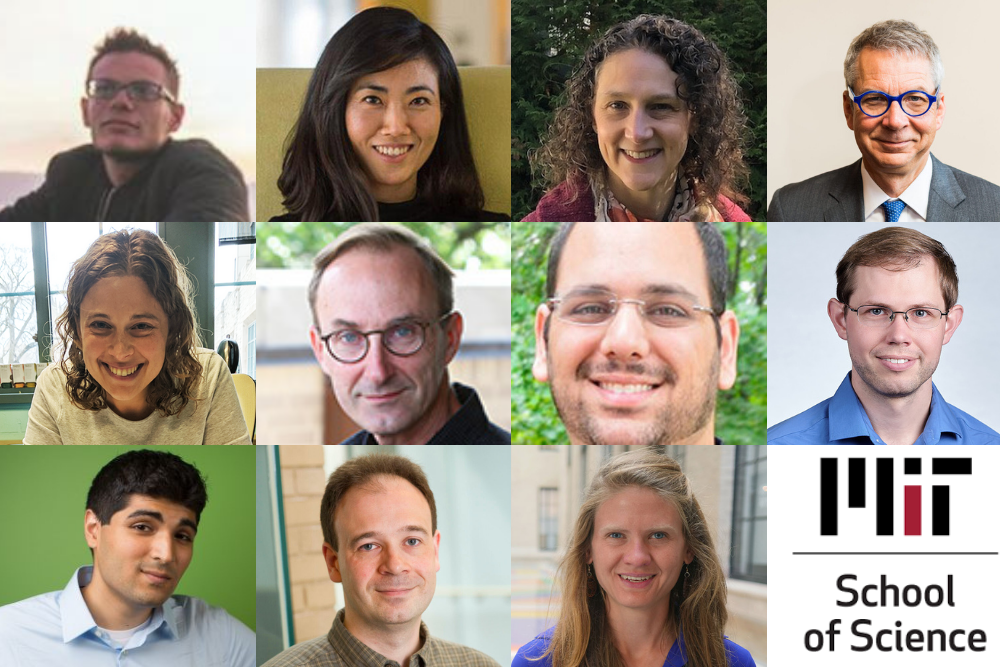 Those selected receive additional support to pursue research and develop their careers.

The School of Science has announced that 11 faculty members have been appointed to named professorships. These positions offer additional support to professors to advance their research and develop their careers.

Andrew Babbin was named a Cecil and Ida Green Career Development Professor. A marine biogeochemist, Babbin studies the processes that return fixed nitrogen in the ocean back to nitrogen gas, exploring marine nitrogen’s control on life in the ocean and its effects on climate. His research sheds light on the ocean’s potential to sustain life and store carbon. Babbin earned a BS degree from Columbia University in 2008 and a PhD from Princeton University in 2014. He came to MIT in 2014 as a postdoc in the Department of Civil and Environmental Engineering before joining the Department of Earth, Atmospheric and Planetary Sciences in January 2017.

Gloria Choi was selected as the Mark Hyman Jr. Career Development Professor. Choi, an associate professor in the Department of Brain and Cognitive Sciences and an investigator with the Picower Institute, examines the interaction of the immune system with the brain and the effects of that interaction on neurodevelopment, behavior, and mood. She also studies how social behaviors are regulated according to sensory stimuli, context, internal state, and physiological status, and how these factors modulate neural circuit function via a combinatorial code of classic neuromodulators and immune-derived cytokines. She received her bachelor’s degree from the University of California at Berkeley, and her PhD from Caltech, where she studied with David Anderson. She was a postdoc in the laboratory of Richard Axel at Columbia University. Choi joined the MIT faculty as an assistant professor in 2013.

Arlene Fiore joined MIT as the inaugural Peter H. Stone and Paola Malanotte Stone Professor in Earth, Atmospheric and Planetary Sciences in July 2021. Her research encompasses air pollution, chemistry-climate connections, trends and variability in atmospheric constituents, and biosphere-atmosphere interactions. Fiore’s group investigates regional meteorology and climate feedbacks due to aerosols versus greenhouse gases, future air pollution responses to climate change, as well as the factors controlling the oxidizing capacity of the atmosphere. After earning a bachelor’s degree and PhD from Harvard University, Fiore held a research scientist position at the Geophysical Fluid Dynamics Laboratory and was appointed as an associate professor with tenure at Columbia University in 2011.

Peter H. Fisher is now the Thomas A. Frank (1977) Professor of Physics. His interests include the detection of dark matter, development of new particle detectors, compact energy supplies, and wireless energy transmission. Currently serving as the head of the Department of Physics, Fisher also holds appointments in the Institute for Soldier Nanotechnologies, the Laboratory for Nuclear Science, and the Kavli Institute. He is involved in CERN’s Alpha Magnetic Spectrometer experiment to make high-precision measurements of cosmic rays and the development of new ideas for dark matter. After receiving a BS in engineering physics from the University of California at Berkeley in 1983 and a PhD in nuclear physics from Caltech in 1988, Fisher was at the Johns Hopkins University from 1989 to 1994 and joined MIT in 1994.

Danna Freedman has been named the Frederick George Keyes Professor of Chemistry. Freedman leverages inorganic chemistry to solve problems in physics. Her research focuses on creating spin-based quantum bits and synthesizing new emergent materials. Freedman received her bachelor’s degree from Harvard University and her PhD from the University of California at Berkeley, then conducted postdoctoral research at MIT before joining the faculty at Northwestern University as an assistant professor in 2012, where she was promoted to associate professor in 2018 and full professor in 2020. Freedman returned to MIT’s Department of Chemistry in 2021.

Michel Goemans has been named the RSA Professor of Mathematics. Goemans has been head of the Department of Mathematics since July 1, 2018, following a year as interim head. He received his undergraduate degree in applied mathematics from Université Catholique de Louvain in 1987 and completed his PhD at MIT in 1990. He has been on the faculty since 1992, receiving tenure in 1999, and held the Leighton Family Professorship from 2007 to 2017. The RSA cryptosystem is the brainchild of Ron Rivest, Adi Shamir, and Len Adleman, whose fruitful collaboration spanned the Laboratory for Computer Science — today the Computer Science and Artificial Intelligence Laboratory (CSAIL) — and the Department of Mathematics. Goemans is also a member of the Theory of Computation Group of CSAIL, and recently joined the Computing Council of the MIT Schwarzman College of Computing. Goemans’ research interests include combinatorics, optimization and algorithms. In particular, his pioneering use of semidefinite optimization and other techniques for designing approximation algorithms for hard combinatorial optimization problems has been rewarded with several awards, such as the Fulkerson, Farkas and Dantzig prizes.

Or Hen was named the Class of 1956 Career Development Associate Professor of Physics. He investigates quantum chromodynamic effects in the nuclear medium and the interplay between partonic and nucleonic degrees of freedom in nuclei. Specifically, Hen utilizes high-energy scattering of electron, neutrino, photon, proton, and ion off atomic nuclei to study short-range correlations: temporal fluctuations of high-density, high-momentum, nucleon clusters in nuclei with important implications for nuclear, particle, atomic, and astrophysics. He received his undergraduate degree in physics and computer engineering from the Hebrew University and earned his PhD in experimental physics at Tel-Aviv University. Hen was an MIT Pappalardo Fellow in Physics from 2015 to 2017 before joining the physics faculty in July 2017.

Brett McGuire is now the Class of 1943 Career Development Assistant Professor of Chemistry. He uses the tools of physical chemistry, molecular spectroscopy, and observational astrophysics to understand how the chemical ingredients for life evolve with and help shape the formation of stars and planets. His group aims to detect more new molecules in space and to better understand their significance, advancing the field of astrochemistry. McGuire obtained a bachelor’s degree from the University of Illinois at Urbana-Champaign in 2009, a master’s degree from Emory University in 2011, and a PhD from Caltech in 2015. McGuire joined the Department of Chemistry in 2020.

Iain W. Stewart has been selected for the Otto (1939) and Jane Morningstar Professorship in Science. Stewart is a professor of physics and the director of the Center for Theoretical Physics. His research interests involve theoretical nuclear and particle physics. In particular, he focuses upon the development and application of effective field theories to answer fundamental questions about interactions between elementary particles. Stewart earned a bachelor’s degree in physics and mathematics and a master’s degree in physics from the University of Manitoba in Canada. He then received his PhD from Caltech in 1999. Stewart joined the physics faculty at MIT in 2003, was promoted to associate professor with tenure in 2009, and became a full professor in 2013.

Ankur Moitra, a theoretical computer scientist, is now the Norbert Wiener Professor of Mathematics. The aim of his work is to bridge the gap between theoretical computer science and machine learning by developing algorithms with provable guarantees and foundations for reasoning about their behavior. Moitra received his bachelor’s degree in electrical and computer engineering from Cornell University in 2007 and his master’s degree and PhD from MIT in computer science in 2009 and 2011, respectively, then spent two years as a fellow at the Institute for Advanced Study and Princeton University. Moitra returned to MIT in 2013 as a professor in applied mathematics and a principal investigator in CSAIL.

Seychelle M. Vos has been named a Robert A. Swanson (1969) Career Development Professor of Life Sciences. Vos examines the interplay of genome organization and gene expression to gain insight into how the organization of a cell affects what it becomes. Vos’ lab examines these pieces at a molecular scale using varied approaches from single-particle cryo-electron microscopy to X-ray crystallography, biochemistry to genetics. This work can help to build a biological understanding of diseases such as developmental disorders or cancers. She received her BS in genetics in 2008 from the University of Georgia and her PhD in molecular and cell biology in 2013 from the University of California at Berkeley. Vos joined the Department of Biology in 2019. 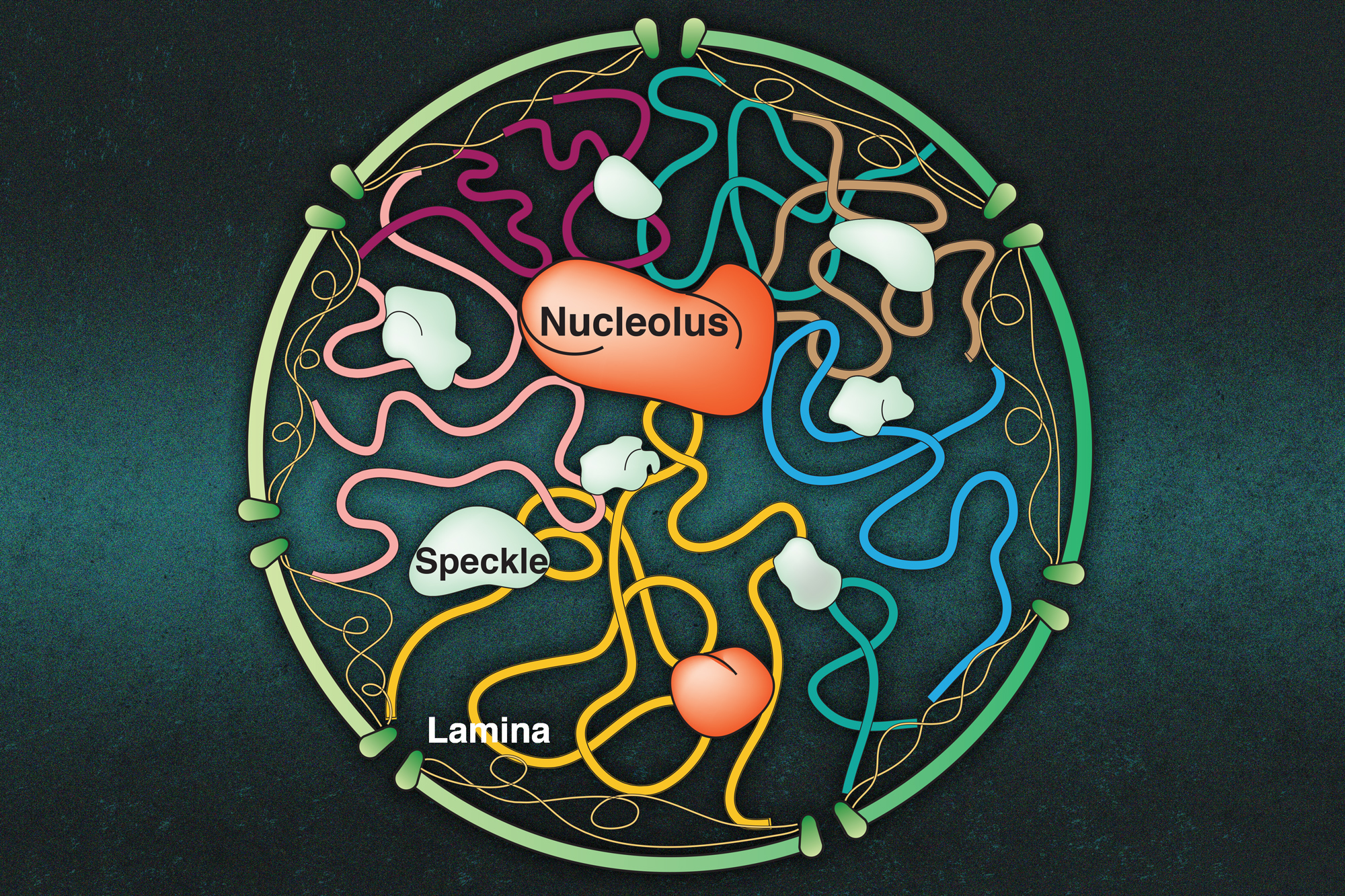 How molecular clusters in the nucleus interact with chromosomes 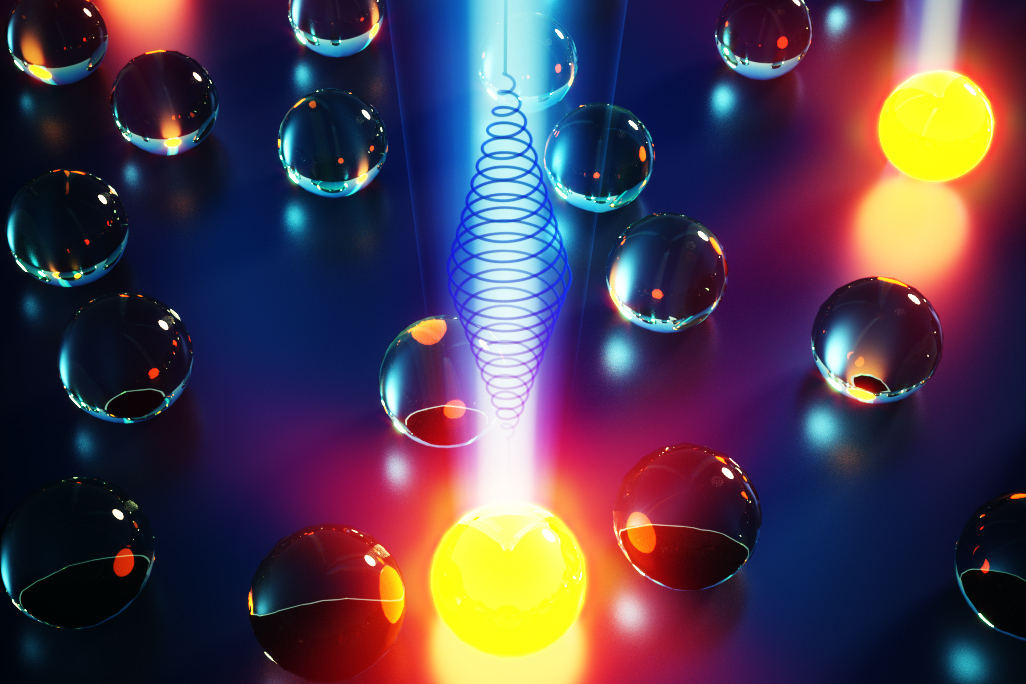 Getting quantum dots to stop blinking 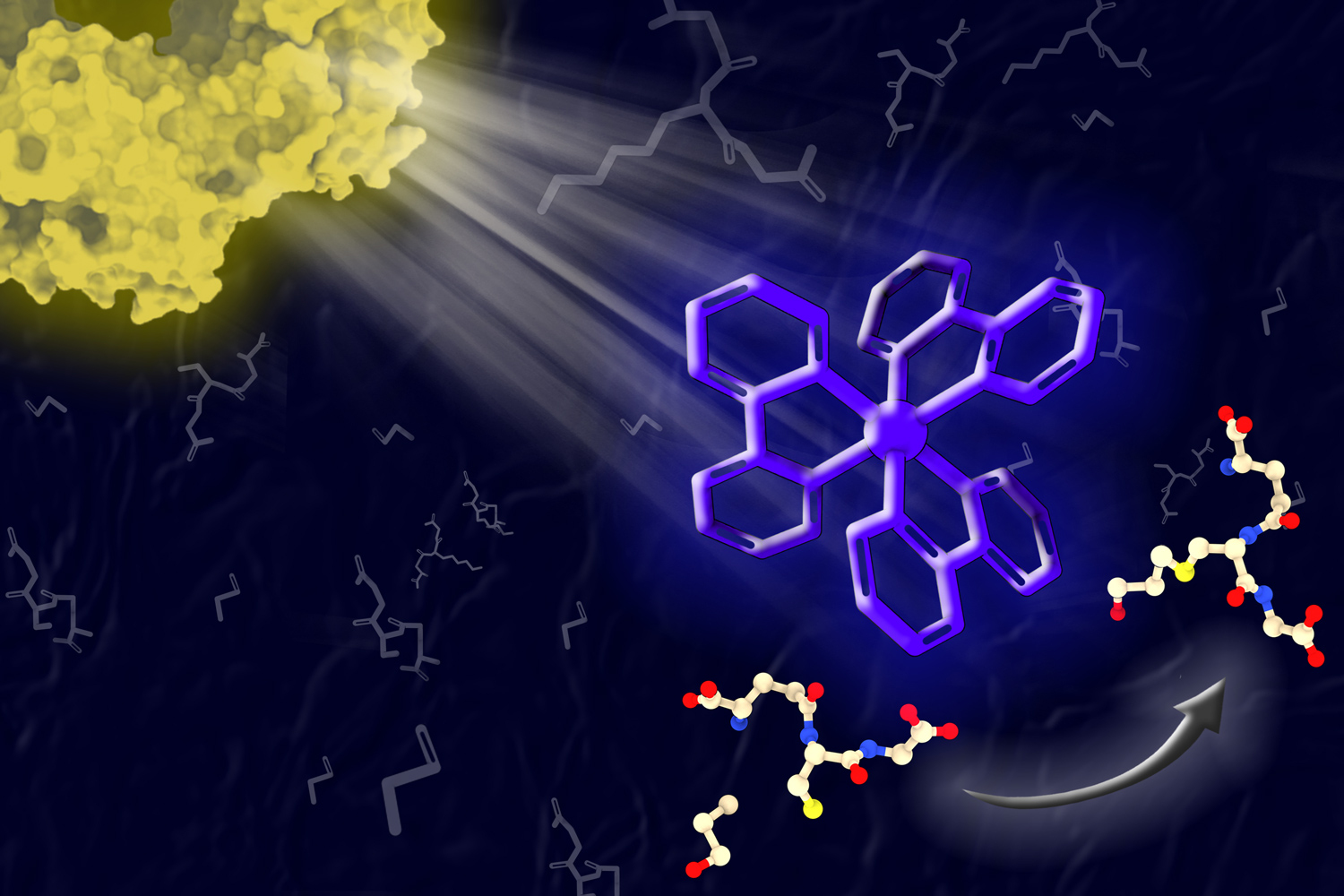 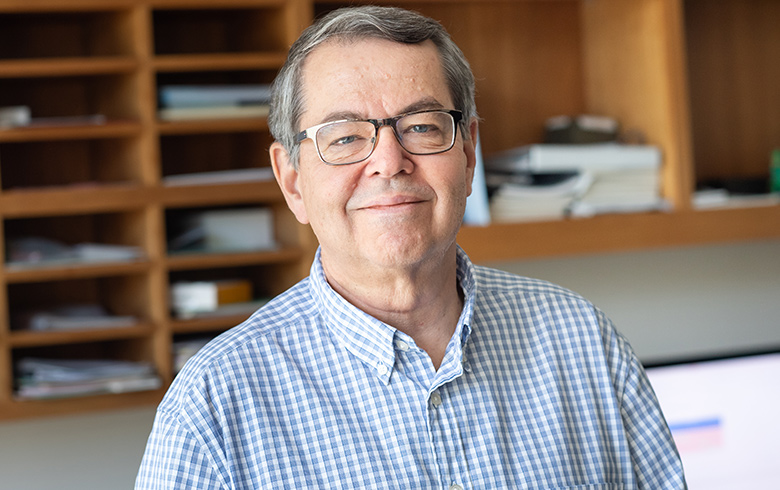