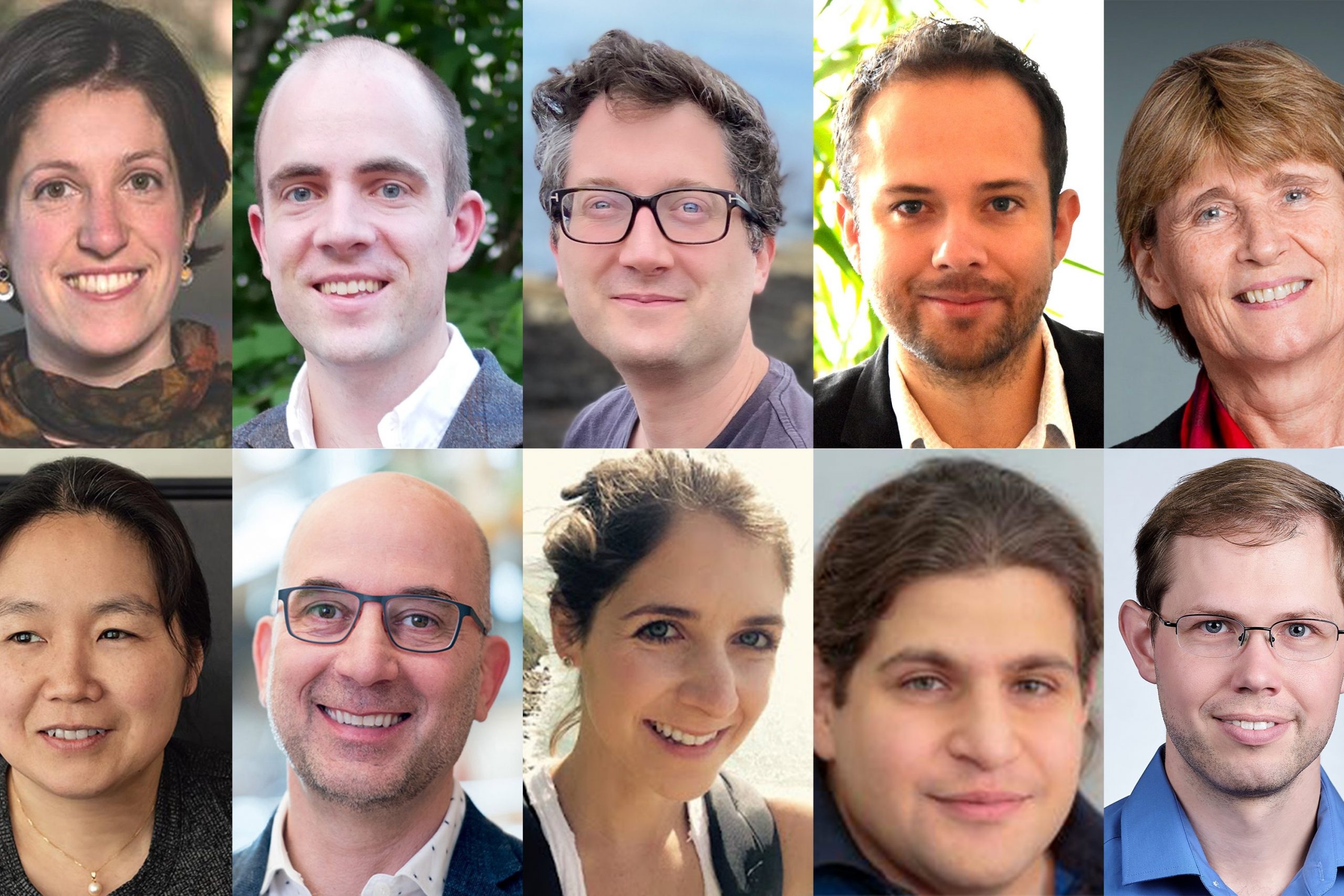 Images courtesy of the faculty.

Despite the upheaval caused by the coronavirus pandemic, 10 new faculty members have joined MIT in the departments of Biology; Chemistry; Earth, Atmospheric and Planetary Sciences; Mathematics; and Physics. The School of Science welcomes these new faculty, most of whom began their appointment July 1, amidst efforts to update education and research plans for the fall semester. They bring exciting and valuable new areas of strength and expertise to the Institute.

Camilla Cattania is an earthquake scientist. She uses continuum mechanics, numerical simulations, and statistics to study fault mechanics and earthquake physics at different scales, from small repeating events to fault interaction on regional and global scales. The models she has developed can help forecast earthquake sequences caused by seismic or aseismic events, such as aftershocks and swarms induced by forcing mechanisms like magma moving under the Earth’s surface. She has also developed theoretical models to explain why certain faults rupture in predictable patterns while others do not. Cattania’s research plans include widening her focus to other tectonic settings and geometrically complex fault structures.

Cattania earned her bachelor’s and master’s degrees from Cambridge University in experimental and theoretical physics in 2011, after which she completed a PhD in Germany at the GFZ German Research Center for Geosciences and the University of Potsdam in 2015. Subsequently, she spent a few months as a researcher at Woods Hole Oceanographic Institution and as a postdoc at Stanford University and her doctoral institution. She joins the Department of Earth, Atmospheric and Planetary Sciences as an assistant professor.

Richard Fletcher researches quantum physics using atomic vapors one-millionth the density of air and one-millionth the temperature of deep space. By manipulating the gas with intricately sculpted laser beams and magnetic fields, he can engineer custom-made quantum worlds, which provide both a powerful test bed for theory and a wonderful playground for discovering new phenomena. The goal is to understand how interesting collective behaviors emerge from the underlying microscopic complexity of many interacting particles. Fletcher’s interests include superfluidity in two-dimensional gases, methods to probe the correlations between individual atoms, and how the interplay of interactions and magnetic fields leads to novel physics.

Fletcher is a graduate of Cambridge University, where he completed his bachelor’s in 2010. Before returning to Cambridge University to earn his PhD in 2015, he was a research fellow at Harvard University. He originally came to MIT as a postdoc in 2016 and now joins the Department of Physics as an assistant professor. Fletcher is a member of the MIT-Harvard Center for Ultracold Atoms.

William Frank investigates deformation of the Earth’s crust. He combines seismology and geodesy to explore the physical mechanisms that control the broad continuum of rupture modes and fault instabilities within the Earth. His research has illuminated the cascading rupture dynamics of slow fault slip and how the aftershocks that follow a large earthquake can reveal the underlying behavior of the host fault. Frank considers shallow shifts that cause earthquakes down to deep creep that is all-but-invisible at the surface. His insights work to improve estimates of seismic hazards induced by tectonic dynamics, volcanic processes, and human activity, which can then inform risk prediction and mitigation.

Frank holds a bachelor’s degree from the University of Michigan in earth systems science, which he received in 2009. The Institut de Physique du Globe de Paris awarded him a master’s degree in geophysics in 2011 and a PhD in 2014. He first joined MIT as a postdoc in 2015 before moving to the University of Southern California as an assistant professor in 2018. He now returns as an assistant professor in the Department of Earth, Atmospheric and Planetary Sciences.

Ronald Fernando Garcia Ruiz advances research on fundamental physics and nuclear structure largely through the development of novel laser spectroscopy techniques. He investigates the properties of subatomic particles using atoms and molecules made up of short-lived radioactive nuclei. Garcia Ruiz’s experimental work provides unique information about the fundamental forces of nature and offers new opportunities in the search beyond the Standard Model of particle physics. His previous research at CERN focused on the study of the emergence of nuclear phenomena and the properties of nuclear matter at the limits of existence.

Garcia Ruiz’s bachelor’s degree in physics was achieved in 2009 at Universidad Nacional de Colombia. After earning a master’s in physics in 2011 at Universidad Nacional Autónoma de México, he completed a doctoral degree in radiation and nuclear physics at KU Leuven in 2015. Prior to joining MIT, he was first a research associate at the University of Manchester from 2016-17 and then a research fellow at CERN. Garcia Ruiz has now joined the Department of Physics as an assistant professor. He began his appointment Jan. 1. He is also affiliated with the Laboratory for Nuclear Science.

Ruth Lehmann studies germ cells. The only cells in the body capable of producing an entire organism on their own, germ cells pass genomic information from one generation to the next via egg cells. By analyzing the organization of their informational material as well as the mechanics they regulate, such as the production of eggs and sperm, Lehmann hopes to expose germ cells’ unique ability to enable procreation. Her work in cellular and developmental biology is renowned for identifying how germ cells migrate and lead to the continuation of life. An advocate for fundamental research in science, Lehmann studies fruit flies as a model to unveil vital aspects of early embryonic development that have important implications for stem cell research, lipid biology, and DNA repair.

As an astrochemist, Brett McGuire is interested in the chemical origins of life and its evolution. He combines physical chemistry experiments and analyses with molecular spectroscopy in a lab, the results of which he then compares against astrophysics observation. His work ties together questions about the formation of planets and a planet’s ability to host and create life. McGuire does this by investigating the generation, presence, and fate of new molecules in space, which is vast and mostly empty, providing unique physical challenges on top of chemical specifications that can impact molecular formation. He has discovered several complex molecules already, including benzonitrile, a marker of carbon-based reactions occurring in an interstellar medium.

McGuire’s BS degree was awarded by the University of Illinois at Urbana-Champaign in 2009. He completed a master’s in physical chemistry in 2011 at Emory University and a PhD in 2015 at Caltech. He then pursued a postdoc at the National Radio Astronomy Observatory and the Harvard-Smithsonian Center for Astrophysics. He joins the Department of Chemistry as an assistant professor.

Dor Minzer works in the fields of mathematics and theoretical computer science. His interests revolve around computational complexity theory, or — more explicitly — probabilistically checkable proofs, Boolean function analysis, and combinatorics. With collaborators, he has proved the 2-to-2 Games Conjecture, a central problem in complexity theory closely related to the Unique-Games Conjecture. This work significantly advances our understanding of approximation problems and, in particular, our ability to draw the border between computationally feasible and infeasible approximation problems.

Minzer is not new to online education. After earning his bachelor’s degree in mathematics in 2014 and a PhD in 2018, both from Tel-Aviv University, he became a postdoc at the Institute for Advanced Study at Princeton University. He joins the Department of Mathematics as an assistant professor.

Lisa Piccirillo is a mathematician specializing in the study of three- and four-dimensional spaces. Her work in four-manifold topology has surprising applications to the study of mathematical knots. Perhaps most notably, Piccirillo proved that the Conway knot is not “slice.” For all other small knots, “sliceness” is readily determined, but this particular knot had remained a mystery since John Conway presented it in the mid-1900s. After hearing about the problem at a conference, Piccirillo took only a week to formulate a proof. She is broadly interested in low-dimensional topology and knot theory, and employs constructive techniques in four-manifolds.

Piccirillo earned her BS in mathematics in 2013 from Boston College. Her PhD in mathematics was earned from the University of Texas at Austin in 2019, and from 2019-20 she was a postdoc at Brandeis University. She joins the Department of Mathematics as an assistant professor.

Jonathan Weissman’s research interest is protein folding and structure, an integral function of life. His purview encompasses the expression of human genes and the lineage of cells, as well as protein misfolding, which can cause diseases and other physiological issues. He has made discoveries surrounding protein folding mechanisms, the development of CRISPR gene-editing tools, and other new therapeutics and drugs, and in the process generated innovative experimental and analytical methods and technologies. One of his novel methods is the ribosome profiling approach, which allows researchers to observe in vivo molecular translation, the process by which a protein is created according to code provided by RNA, a major advancement for health care.

Weissman earned a bachelor’s degree in physics from Harvard University in 1998 and a PhD from MIT in 1993. After completing his doctoral degree, he left MIT to become a postdoc at Yale University for three years, and then a faculty member at the University of California at San Francisco in 1996. He returns to MIT to join the Department of Biology as a full professor and a member of the Whitehead Institute for Biomedical Research. He is also a Howard Hughes Medical Institute investigator.

Yukiko Yamashita, a stem cell biologist, delves into the origins of multicellular organisms, asking questions about how genetic information is passed from one generation to the next, essentially in perpetuity, via germ cells (eggs and sperm), and how a single cell (fertilized egg) becomes an organism containing many different types of cells. The results of her work on stem cell division and gene transmission has implications for medicine and long-term human health. Using fruit flies as a model in the lab, she has revealed new areas of knowledge. For example, Yamashita has identified the mechanisms that enable a stem cell to produce two daughter cells with distinct fates, one a stem cell and one a differentiating cell, as well as the functions of satellite DNA, which she found to be crucial, unlike the “waste” they were previously thought to be.

Yamashita received her bachelor’s degree in biology in 1994 and her PhD in biophysics in 1999, both from Kyoto University. After being a postdoc at Stanford University for five years, she was appointed a faculty member at the University of Michigan in 2007. She joined the Department of Biology as a full professor with a July 1 start. She also became a member of the Whitehead Institute of Biomedical Research and is a standing investigator at the Howard Hughes Medical Institute. 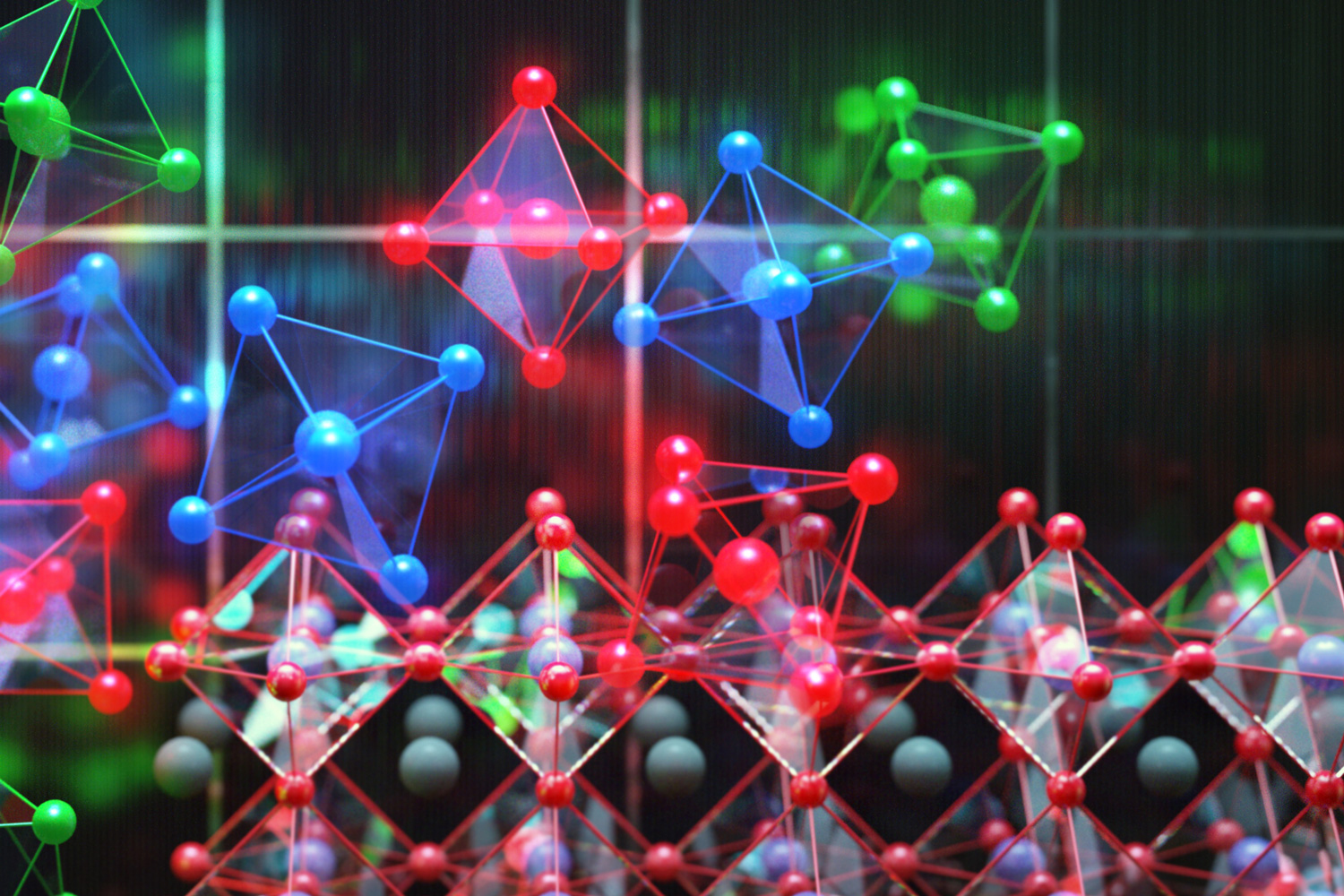 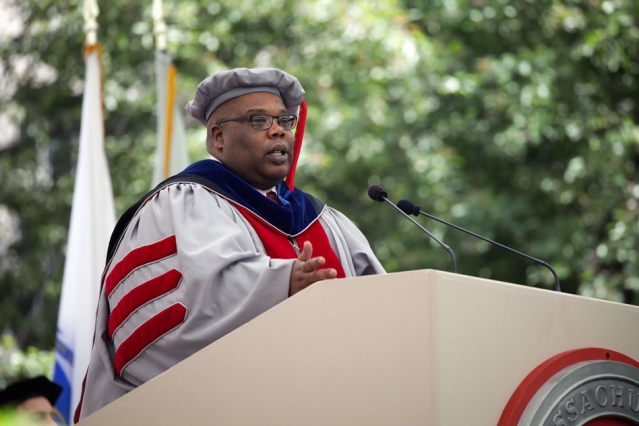 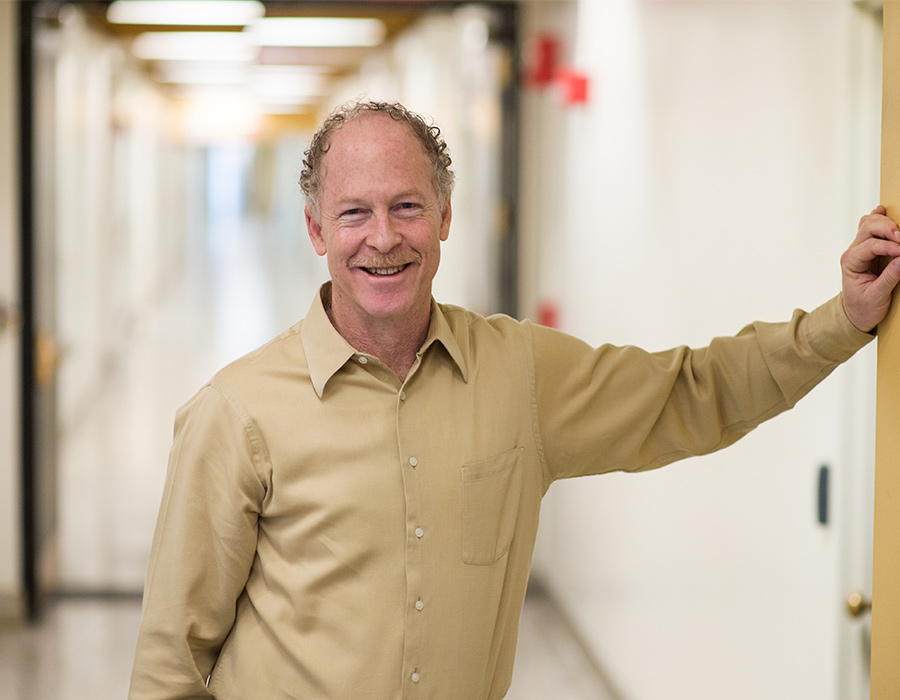 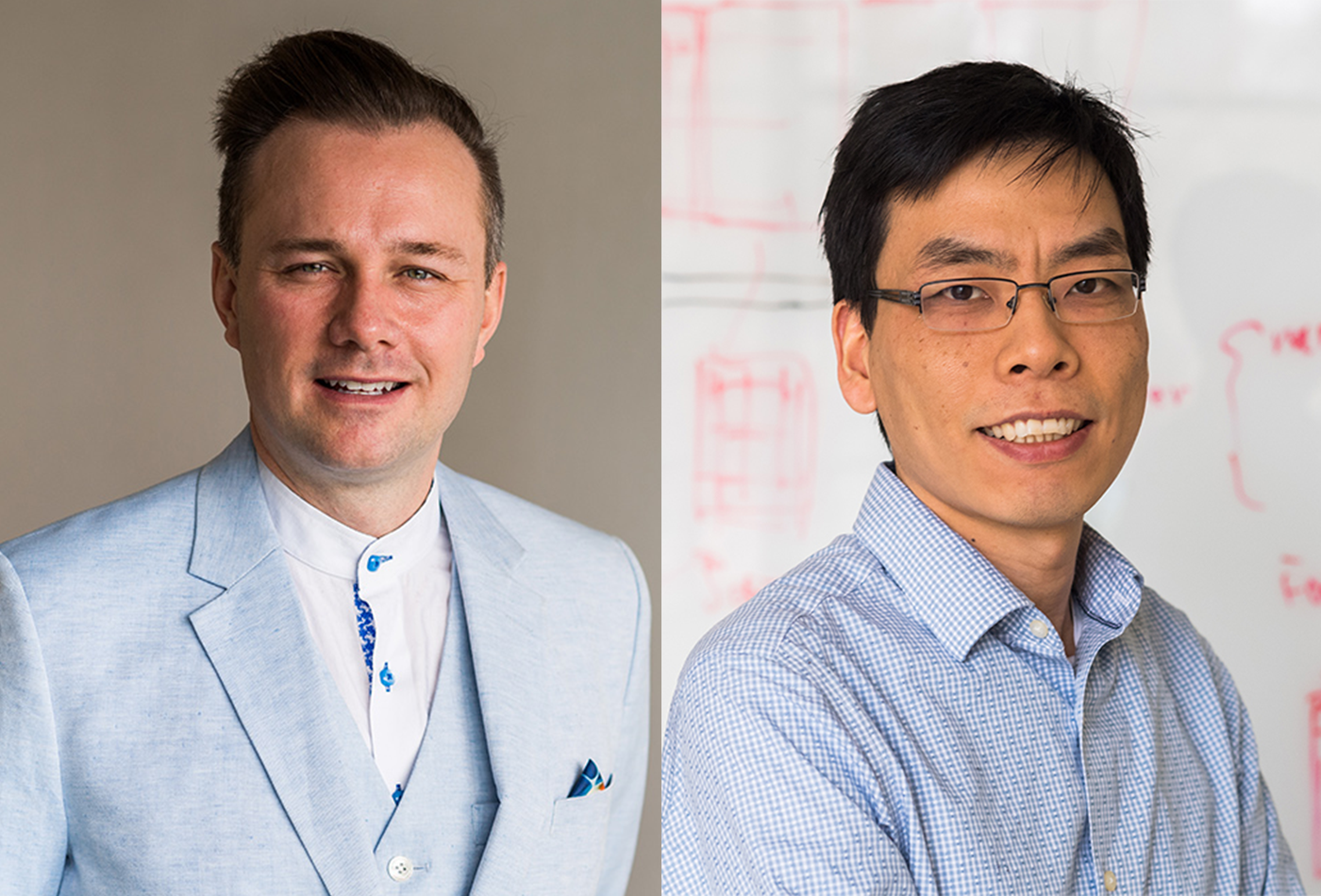