According to the old rule Garbage In = Garbage Out, a crystal structure is only as good as the crystal used for data collection. Therefore, it is worthwhile to spend time on improving the quality of your crystals. Even though growing crystals is more of an art than a science and luck is a major factor, there are some things to do and some other things not to do. The following paragraphs mention some of the more important ones.  But first some theoretical background about crystallization.

Theoretically, crystallization should start when the concentration of a compound in a solvent is higher than the solubility product of this compound. Generally, however, crystallization is kinetically hindered and crystals grow only from supersaturated solutions. There are several ways to achieve this metastable state of supersaturation.

The easiest is increasing the concentration by evaporation of the solvent until crystallization sets in. This can be achieved by not closing the lid of the tube or flask very tightly and simply waiting. Many crystals are obtained from NMR tubes. NMR tubes are usually sealed with that little colorful baseball-cap shaped plug, which is not overly tight. When forgotten in the fridge or on the lab bench for several months, the solvent slowly evaporates from the NMR tube, the solution becomes first saturated, then supersaturated, and, finally, crystals grow.

Another way of obtaining a supersaturated solution is making use of the fact that many compounds are better soluble in hot solvents than in cold ones. A hot solution that is almost saturated is likely to yield crystals at room temperature or, if appropriate, below. However, crystals that grow at higher temperature are frequently twinned or show static disorder.

Another way to supersaturation, frequently the best way to grow quality crystals, is the use of binary solvent systems. You need two liquids that mix well, and your compound should be soluble in only one of them. The liquid in which your compound is soluble is called the solvent, the other liquid the precipitant (or “anti-solvent”). As your compound is less soluble in a mixture of the two liquids, you can grow crystals by slowly mixing a (not too) concentrated solution of your compound with the precipitant. This can happen as liquid-liquid diffusion, gas-phase diffusion or via a membrane (dialysis).

Crystallization is preceded by nucleation, which happens either spontaneously or is induced by vibration or particles. If nucleation sets in too quickly, too many too-small crystals will grow. The figure below shows an equilibrium diagram of a crystallization from a solution. For a diffraction experiment you need no more than one good single crystal. The best way of growing a few nice crystals, as opposed to a lot of bad crystals, is to change the concentration slowly into the area of nucleation, without getting too deep into it. The formation of (not too many) nuclei and the starting crystallization will reduce the concentration and bring the solution back into the region of oversaturation. That is the region in the phase diagram where existing crystals grow, but no new nuclei form. You want to keep your system there. That means all changes of your system need to be slow.

Diffraction quality crystals need to be relatively large. Maybe not quite on the engagement ring scale, but 0.1 to 0.3 mm in each dimension is a good number. In order to grow large crystals, it is important to avoid having too many nucleation sites (see above). Crystals that grow more slowly, tend to be larger. Mostly for crystals grown by slow cooling of the solvent: it sometimes improves the quality and size of the crystals if the solution is slowly warmed up until almost all crystals are dissolved again and then cooled down a second time very slowly. This can reduce the number of crystals obtained and usually improves quality and size.

A good crystal grows slowly. A good time frame for a crystallization experiment seems to be some two to seven days. Crystals that grow within minutes usually don’t diffract as well as they could. 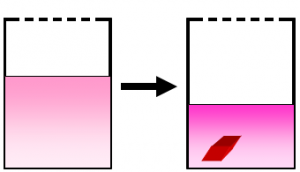 As mentioned above, this is the simplest method to grow crystals. Prepare a nearly saturated solution of your compound in a suitable solvent, transfer at least a couple of milliliters into a clean container, ideally with a large surface, and cover. Don’t cover it too tightly, though (aluminum foil with some punched holes seems to work well), as you want the solvent to evaporate over the following days. Set the container aside and disturb the experiment as little as possible (remember: vibration can cause nucleation). 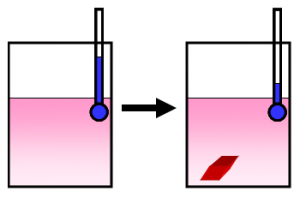 Prepare a nearly saturated solution of your compound at or close to the boiling point of the solvent of your choice. Transfer the solution into a clean container and cover. Place the container into a heat bath at about the same temperature and allow to cool slowly. A Dewar with hot water frequently does the trick. A variation of this method is to prepare a saturated solution at room temperature and place the container in a cold place. E.g. thf is still liquid at -80°C, which allows growing crystals in a dry-ice acetone bath (or in the -80°C freezer). 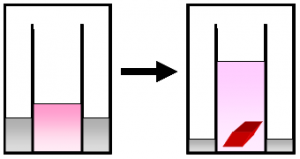 For this method you need a binary solvent system. Choose two liquids that mix well. Your compound should be relatively well soluble in the liquid with the higher boiling point — we call this liquid the solvent – and nearly insoluble in the liquid with the lower boiling point, which we call the precipitant. Prepare a solution of your compound in a small open container. Place this receptacle inside a larger one that contains some precipitant and seal the outer vessel well. Over time, the precipitant, which is more volatile, will diffuse over the gas phase into the solvent, leading to oversaturation, nucleation and, if all goes well, finally crystallization. You can regulate the diffusion speed by varying the temperature. 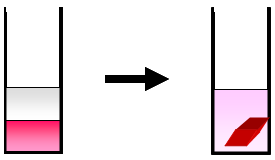 As with the vapor diffusion method, you need a binary solvent system. In this case the boiling points don’t matter very much but the specific densities of the two liquids need to be different. Prepare a concentrated solution of your compound in the solvent, and have the precipitant handy. Transfer a small volume of whichever liquid has the higher specific density in a narrow receptacle and carefully layer it with the other liquid. This works best with a syringe and hypodermic needle. Over time the two solvents will mix and, if you are lucky, crystals will form. A variation of this method is to freeze the lower layer before you add the second liquid. That makes it much easier to get a clean separation between the two layers.

Sublimation should not be the method of choice to grow diffraction quality crystals. Sublimation usually takes place at relatively high temperatures, which means that there is to a lot of energy in the system when the crystals form. At high temperatures, the differences between two similar molecule orientations can become insignificant which results in a twinned or statically disordered crystal. In addition, crystals are usually growing too fast when they are obtained by sublimation, which can also facilitate twining or disorde0r.

Albeit somewhat exotic, convection can be a good method to grow high quality crystals. Generating a temperature gradient in the crystallization vessel by either cooling or heating part of it leads to a slow and steady flow within the liquid phase. The idea is that more substance dissolves in the hotter part of the container, travels to the colder region where it starts to crystallize. The crystals move with the stream, travelling to the hotter zone, where they completely or partially dissolve. The ones dissolving only partially will grow larger on their next trip from warm to cold and back to warm. Several hundred rounds can make for a nice diffraction quality crystal. The velocity in the vessel is proportional to the heat gradient, which should not be too large, as too rapid convection will not leave enough time for nucleation. 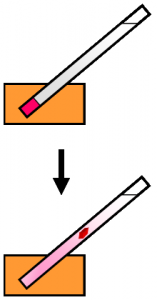 Imitating David Watkin’s construction (Watkin, D. J., J. Appl. Cryst. (1972), 5, 250.), Chuck Barnes came up with the following idea: “Cut off the tip of a Pasteur pipet about one cm above the beginning of the narrowing part, and then heat seal the small end, you get a nice cheap thermal gradient vial. Place a slurry of your material in a relatively poor solvent in the vial and centrifuge to pack the undissolved material in the tip. After centrifuging, you have a pellet of solid (~5mm) in the tip, covered by clean ‘poor’ solvent. Seal the vial with Teflon tape and parafilm. I make the heater from the small cylinder-shaped ceramic resistors which are usually available from the electronics shop. I found some green ones of 100 ohms which are a good size. Place just the tip of the vial with the solid pellet in the heater, with the vial at ~45 degrees from vertical. Apply voltage to get maybe 50 C at the resistor, and you have a nice thermal gradient up the vial. With luck, you get crystals growing up the vial. It seems important to make sure all the amorphous material is packed down…no powder where you want the crystals to grow.” Chuck adds about this method: “This has given me excellent crystals at times, and has on occasion given superior crystals (smaller mosaic spread) even when crystals were available from evaporation.”

How to treat your crystals once you have them

It is always a good idea to not change the environmental conditions for your crystals too often. When possible, leave them alone.