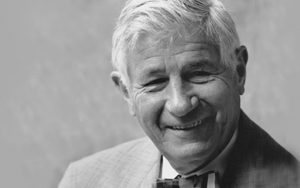 Mr. Paul Maxwell Cook. Paul Cook was accepted to MIT before he was 17, but World War II interrupted his education. After serving in the Army’s 10th Mountain Division in Italy, Cook resumed his studies and graduated from MIT in 1947 with a degree in Chemical Engineering and in 1948 started his career as a Chemical Engineer at SRI International in Menlo Park, California.

In 1957, Cook founded Raychem Corporation to develop commercial applications for an entirely new field – radiation chemistry – and served as Chief Executive of the company until 1990. Some 200,000 products were created at Raychem under Paul Cook’s leadership. He became Chairman of the Board of Directors in 1990 and remained on the Board until 1995.

He became a Director of SRI International in 1987, served as Chairman from 1993 to 1998 and became Emeritus in 1999. He was also Chairman of Sarnoff Corporation from 1993 to 2001. In 2000 he founded Promptu Corporation, served as CEO until May of 2006. Promptu is pioneering the use of speech technology to navigate and search content on TV and mobile phones.

Paul Cook was elected to the National Academy of Engineering in 1985 and the American Academy of Science in 1990. In 1988, he was one of ten American Technologists to receive the National Medal of Technology from President Ronald Reagan. He has also been the recipient of the Winthrop-Sears Medal from the Chemical Industry Association in 1986 and, in 1989, the Golden Omega Award for contributions to technical progress by the Electrical/Electronic Insulation Conference (EEIC). He was named to the San Francisco Bay Area Business Hall of Fame in 1999.