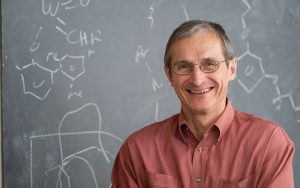 Richard Schrock was 8 when his brother gave him his first chemistry set, a gift that piqued a passion that would ultimately lead to Schrock’s winning the 2005 Nobel Prize in chemistry.

At a wide-ranging MIT press conference on Oct. 5, the new laureate described why chemistry is so compelling for him, what it was like to get “the call” at 5:30 in the morning, and much more.

“I was shaking so hard I could hardly hold the phone,” said the Frederick G. Keyes Professor of Chemistry, describing his conversation with representatives of the Royal Swedish Academy of Sciences.

Later he called his soon-to-be 92-year-old mother. “I told her I’d won a Nobel Prize, and she said, ‘A what?’ She’s a little hard of hearing.” Once she understood, however, “she was very excited, and happy to hear that she’ll visit Stockholm for the first time.” (The laureates will receive their prizes in Stockholm in the company of their families on Dec. 10.)

The new laureate expressed his heartfelt thanks, particularly to his wife, Nancy F. Carlson, “who married me in 1971 when my stock was real cheap.” He also talked about how much he loves MIT. “I’m overjoyed to be a faculty member at MIT, and that joy has not diminished.” This is Schrock’s 30th year on the faculty.

“There aren’t any colleagues in the world like those at MIT,” he said, adding that the same is true about the students. “It’s embarrassing teaching students [who are] smarter than you.”
He called one of his colleagues, Professor Daniel Nocera, very early Wednesday morning, soon after he learned of the prize. “I had promised,” Schrock said, “so I did. And [Nocera] said, ‘I’ll come right over.'” Schrock grinned. “I said, ‘Why don’t you wait an hour.'”

What makes chemistry so compelling to Schrock? “I like to manipulate things. I like to cook, I like woodworking, and I like to make molecules.” Referring to the catalysts for which he won the prize, he said, “making a truly unique compound is very, very exciting.”

In his remarks, Schrock emphasized the importance of basic research, which he defined as the exploration of “an interesting new area that may have potential.”
“I got here by doing basic research,” he said.

Research “doesn’t have a lot of cachet associated with it,” but Schrock recalled the day early in his career when he created the catalyst whose successors would earn him the Nobel Prize. “I remember going home and telling my wife that I thought I’d done something really interesting,” he said.

And, as Schrock pointed out, his work has had applications. He just didn’t know it at the time.

MIT President Susan Hockfield, attending her first MIT Nobel Prize press conference, thanked Schrock “for conveying in a very real way the excitement that goes on in basic science.”
On Wednesday afternoon, Schrock described his Nobel-winning compounds in a packed Room 10-250. Students stood in doorways and sat in the aisles to hear the Nobel lecture, which Dean of the School of Science Robert Silbey pointed out was the fourth since 2001 for the School of Science.

Schrock noted that he used to teach freshman chemistry in Room 10-250 and joked, “I think there were this many people in the class, but it was never this full.”

Students listened raptly as Schrock explained how his curiosity led him to create and experiment with different catalysts – using tungsten, molybdenum and tantalum – that could speed up reactions involving organic compounds with double or triple carbon bonds.

Schrock had recently finished grad school and was working at duPont in the 1970s when he began working on the new catalysts that would lead to the Nobel. “I didn’t know where (my research) was going to go,” he said. “I was just happy to have a job and a wife who loved me.”

The work that he pursued purely out of curiosity eventually led to the creation of industrially important compounds, demonstrating the importance of basic research, he told the audience.
“These days, basic research is often frowned upon,” he said. And there isn’t enough money to fund it, “due to lower taxes and/or the war in Iraq,” he said in a dig at the Bush administration that drew thunderous applause.